Irenaeus and many others will be documented here.

Porson’s attempt to make the ‘ tres unum sunt,’ Tertullian’s own expression, is a trick of controversy so palpable, that it can deceive none but wilful self-deceivers. The expression is common to the Greek, as well as the Latin, Fathers. Their to (Grk), and (Grk), are the ‘tres unum sunt ’ of Tertullian and Cyprian. This fact is so plain as to make its assertion a truism. Yet in the face of it, Porson asserts the expression to be ‘Tertullian’s own words.’

The phrase was incontrovertibly a conventional formula with the most ancient Fathers, both Greek and Latin. St. Irenaeus and St. Hippolytus, St. Athanasius and St. Basil, use it in common with Tertullian and St. Cyprian. Such an agreement between wholly separate and independent authorities, can be rationally accounted for only in one way,—namely, that the expression was taken from one original source; that source could have been no other than Scripture; and in one Scripture only is the Patristic expression to be

All the steps of this chronological induction are so simple and natural as to recommend it, it is conceived, to the fair consideration of every impartial judgment. We have the seed in 1 John, the blade in the language of Irenaeus and Hippolytus, and the full com in the ear in the Athanasian Creed.

English section
He says, "I bear witness of myself, my testimony is not true; but there is another who beareth witness of me."(2) but if the Lord Himself, who will by and by judge all things, was unwilling to be believed on His own testimony, but preferred to be approved by the judgment and testimony of God the Father, how much more does it be-hove His servants to observe this, who are not only approved by, but even glory in the judgment and testimony of God!
Last edited: Jun 16, 2021

all these beings are indeed said [in Scripture to be], as it were, one
Click to expand...

This was noted by Carl Graham

The Ante-Nicene Fathers: Translations of the Writings of the Fathers Down to A.D. 325, Volume 1
Irenaeus Against Heresies
https://books.google.com/books?id=Pe5YAAAAYAAJ&pg=PA507

3. [This spiritual man] shall also judge all the followers of Valentinus, because they do indeed confess with the tongue one God the Father, and that all things derive their existence from Him, but do at the same time maintain that He who formed all things is the fruit of an apostasy or defect. [He shall judge them, too, because] they do in like manner confess with the tongue one Lord Jesus Christ, the Son of God, but assign in their [system of] doctrine a production of his own to the Only-begotten, one of his own also to the Word, another to Christ, and yet another to the Saviour; so that, according to them, all these beings are indeed said [in Scripture to be], as it were, one; [while they maintain], notwithstanding, that each one of them should be understood [to exist] separately [from the rest], and to have [had] his own special origin, according to his peculiar conjunction. [It appears], then,4 that their tongues alone, forsooth, have conceded the unity [of God], while their [real] opinion and their understanding (by their habit of investigating profundities) have fallen away from [this doctrine of] unity, and taken up the notion of manifold deities, — ...
Click to expand...

Witness of God has one Irenaeus hit

HIT:
[Irenaeus] For it was fitting that the truth should receive testimony from all, and should become [a means of] judgment for the salvation indeed of those who believe, but for the condemnation of those who believe not; that all should be fairly judged, and that the faith in the Father and Son should be approved by all, that is, that it should be established by all [as the one means of salvation], receiving testimony from all, both from those belonging to it, since they are its friends, and by those having no connection with it, though they are its enemies. For that evidence is true, and cannot be gainsaid, which elicits even from its adversaries striking a testimonies in its behalf; they being convinced with respect to the matter in hand by their own plain contemplation of it, and bearing testimony to it, as well as declaring it. But after a while they break forth into enmity, and become accusers [of what they had approved], and are desirous that their own testimony should not be [regarded as] true. He, therefore, who was known, was not a different being from Him who declared "No man knoweth the Father," but one and the same, the Father making all things subject to Him; while He received testimony from all that He was very man, and that He was very God, from the Father, from the Spirit, from angels, from the creation itself, from men, from apostate spirits and demons, from the enemy, and last of all, from death itself. But the Son, administering all things for the Father, works from the beginning even to the end, and without Him no man can attain the knowledge of God. For the Son is the knowledge of the Father; but the knowledge of the Son is in the Father, and has been revealed through the Son; and this was the reason why the Lord declared: "No man knoweth the Son, [162-163] but the Father; nor the Father, save the Son, and those to whomsoever the Son shall reveal [Him]." For "shall reveal" was said not with reference to the future alone, as if then [only] the Word had begun to manifest the Father when He was born of Mary, but it applies indifferently throughout all time. For the Son, being present with His own handiwork from the beginning, reveals the Father to all; to whom He wills, and when He wills, and as the Father wills. Wherefore, then, in all things, and through all things, there is one God, the Father, and one Word, and one Son, and one Spirit, and one salvation to all who believe in Him.

Comment:
[Bengel] There remain traces of the comma, being originally read among the Greeks, that cannot be ignored. 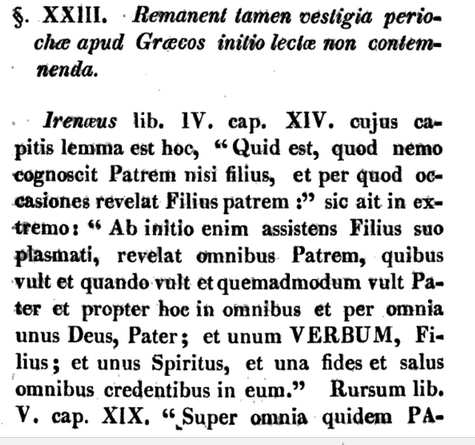 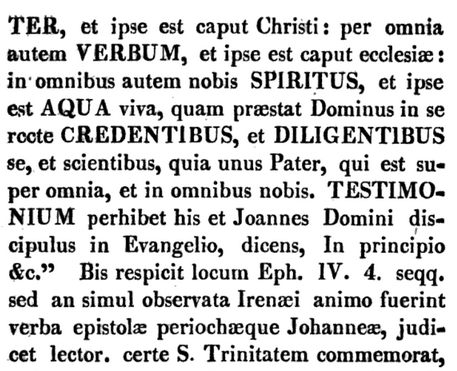 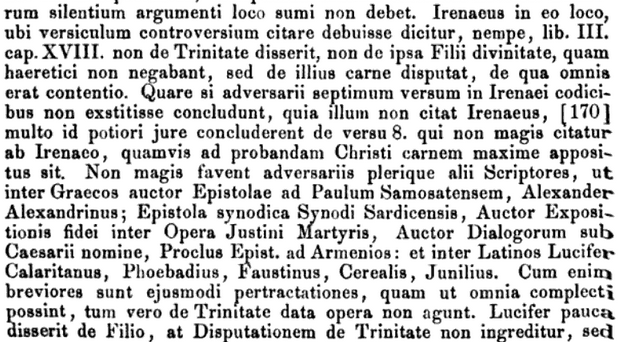