Stunica, the Complutensian Polyglot and the Rhodian manuscript

Nick Sayers - one difficulty of claiming that the Complutensian heavenly witnesses was based on a now unknown Greek manuscript is that this came up rather forcefully in the Erasmus-Stunica correspondence, where Erasmus asked about the Rhodian manuscript and Stunica did not give a cohesive answer.

Inevitably, Stunica objected to the absence of the comma. It is well known, he says, that the Greek manuscripts were often corrupt. And in this case, Jerome’s preface to the Canonical Epistles makes it clear that the comma was in the original. The old Latin manuscripts also confirm the passage, and there is no ambiguity or inconsistency between the comma and the rest of John’s epistle, which corroborates the true catholic faith in the Trinity. Stunica had employed an ancient Rhodian manuscript throughout his work to rebut Erasmus. His opponent naturally suspected that it had been revised to accord with the Vulgate. But now Erasmus saw a better chance, for Stunica had failed to cite it—or any other Greek manuscript—as evidence for the comma.

Raising the Ghost of Arius

(Note: it would be helpful to get the exact spot and text where the Stunica Rhodian ms. claim is made, per RGA. However, BCEME approaches this differently.)

At five places, Stunica gave readings from a manuscript Apostolos from Rhodes, then housed in the university library at Alcalá, which he believed was more authoritative than Erasmus manuscript sources. Two of Stunica’s four annotations on 1 Jn record variants from the Rhodian codex, but on the comma this codex was clearly silent.37

37 Stunica 1520, gives five readings from the Codex Rhodiensis (Wettstein Paul 50 = Apostolos 52), at Jn 3:16, 2 Cor 2:3, Jas 1:22, 2 Pt 2:2, and 1 Jn 5:20. On the basis of these readings, Rhodiensis cannot be identified with any extant manuscript. Erasmus later cited the reading from Rhodiensis in his Annotations on 2 Cor 2:3, not mentioning Stunica by name but heaping Ximénez with exaggerated praises. Here Erasmus also suggests that readings in Rhodiensis were altered to make them conform more closely to the readings of the Latin Vulgate. Further, see ASD VI-8:342–345; Delitzsch 1871, 30–32
Click to expand...

Nothing there indicates that Stunica actually claimed heavenly witnesses support from the Rhodian ms. Apparently contradicting the bold below. Generally Grantley says that BCEME supercedes RGA, if they differ.

And no such claim being made is the Richard Porson position:
https://books.google.com/books?id=L3g_AAAAYAAJ&pg=PA35

Also Thomas Turton on Porson - and Smallbroke to Bentley
https://books.google.com/books?id=Ve1iAAAAcAAJ&pg=PA88

Erasmus wrote his Apologia respondens ad ea quæ Iacobus Lopis Stunica taxauerat in prima duntaxat Novi Testamenti æditione between June and
September 1521, and it was published in October; this exchange would initiate a remarkable series of no less than thirteen attacks and counter-attacks between the two men.37 On the matter of the comma, the editors of the Complutensian bible claimed to have taken their reading of the Greek text of verses 7 and 8 from a Rhodian manuscript in the library at Alcalá, but the reading in the Complutensian bible is quite different from that in the only two extant manuscripts that contain the comma in Greek (Montfortianus and GA 629), which thus cannot be the Rhodian manuscript.38 Erasmus suspected that the Rhodian manuscript was a fiction, implying that the reading of the comma in the Complutensian text had simply been translated into Greek from the Latin Vulgate. Erasmus begins his critique of Stunica’s annotations on 1 Jn 5:7-8 with a taunt: “Where is that Rhodian codex of yours slumbering all this time?”39

In his concluding remarks, Erasmus returns to the Rhodian codex: “Though my dear Stunica so often boasts of his Rhodian codex, to which he attributes such authority, he has strangely not adduced it as an oracle here, especially since it almost agrees with our [Latin] codices so well that it might seem to be a ‘Lesbian straight-edge’ [i.e. evidence made to fit the occasion].”42 (see also p. 369 and on p. 277 is a note involving Charles Butler.)

38 The Greek text of the comma in the Complutensian bible reads: “ὁτι τρείς εισίν οἱ μαρτυρούντες εν τω ουρανώ, ὁ πατήρ και ὁ λόγος και τό άγιον πνεύμα, και οἱ τρεις εις τό εν εισί. και τρείς εισίν οἱ μαρτυρούντες επί τής γης· τό πνεύμα και τό ύδωρ και τό αίμα.” I give the accentuation of the Greek as in the original in order to highlight its particular features, discussed by Lee, 2005. The parallel Latin text reads: “quoniam tres sunt qui testimonium dant in cælo pater verbum et spiritus sanctus et hi tres unum sunt. et tres sunt qui testimonium dant in terra spiritus et aqua et sanguis.” Wachtel, 1995, 317, remarks that the sixteenth-century editions of the Vulgate tend to follow the reading as given in the Complutensian bible, though with the addition of the phrase et hi tres [in] unum sunt in verse 8. In passing it may be noticed that the reading of the parallel Latin text in GA 629 varies slightly from that in the Complutensian, reading Quia tres sunt in verse 7, and spiritus aqua et sanguis in verse 8. Like the Complutensian, GA 629 omits the phrase et hi tres [in] unum sunt at the end of verse 8, as it had in the corresponding place in the Greek. Nevertheless, the number of differences makes it unlikely that GA 629 was the textual model for the reading of the comma in the Complutensian edition.

39 ASD IX.2:252: “Sed interim vbi dormit codex ille Rhodiensis?” When Johann Heinrich Daniel Moldenhawer went to Alcalá in 1784 to inspect the manuscripts, he was told that a large number had been sold “as useless parchments” (como membranas inutiles) to a manufacturer of fireworks in 1749, and it was feared that the Rhodian manuscript was one of these; Michaelis, 1788a, 165; Delitzsch, 1871, 31-33; Bentley, 1980, 146. Herbert Marsh was clearly sceptical that any librarian would ever do such a thing, and remarked: “as rockets are not made of vellum, it is a certain proof that the MSS. were written on paper, and therefore of no great antiquity.” Michaelis, 1802, 2.2:853. Tregelles, 1849, Appendix:2-3 (and subsequently Delitzsch, 1871, 39-41), argued that the fireworks-maker Torija (not Toryo, as often stated) had bought the leather and parchment from the old bindings when several of the old manuscripts were rebound. Tregelles also asserted that all the manuscripts from Ximénez’ library—apart from the mysterious Codex Rhodiensis—are still in the Complutensian library, but this claim is uncertain; Aland and Aland, 1995, 4.

Erasmus passed the same verdict on the Codex Rhodiensis (minuscule WettsteinPaul 50 = Apostolos 52) from which Stunica cited readings in his polemic againstErasmus.42

Newton
https://en.wikisource.org/wiki/An_Historical_Account_of_Two_Notable_Corruptions_of_Scripture
And hence Erasmus, in his answer to Stunica, gloried in the consent of the Spanish manuscripts with his own;

And more about the Erasmus and Complutensian relationship. 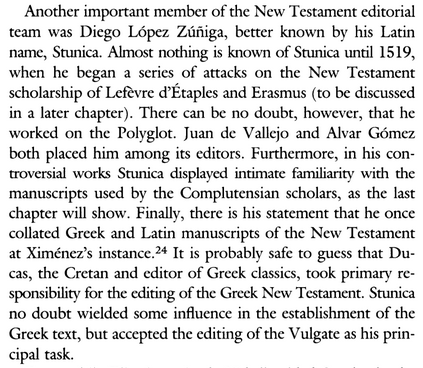 Wikipedia has the error.

Wikipedia has
. Diego Lopez de Zúñiga, was the chief editor and fluent in Latin as well as both Aramaic and Arabic. He was given a team of various translators. Converted translators and academics were favoured and specifically sought since they were fluent in the source languages and the cultures of the texts. Second in command, Alfonso de Zamora (1476–1544) was a converted Jewish scholar, an expert in thalamic studies, and spoke Hebrew as his first language.


ETC
This massively impressive collection is known after the ancient Latin name, Complutum, of the town and university of Alcalá de Henares, where it was produced under the direction of, and with funding from, the Spanish cardinal, Francisco Ximenes de Cisneros (1436–1517), archbishop of Toledo and primate of Spain (1495). Its publication, based on the best contemporary scholarship, was intended to reform and revive the Christian church, as Ximenes makes clear in his prologue (addressed to Pope Leo X), which reflects on the importance of both the original language of Scripture and the original text of Scripture:
http://evangelicaltextualcriticism.blogspot.com/2014/01/10-january-1514-complutensian-polyglot.html
Last edited: Apr 30, 2021
You must log in or register to reply here.
Share:
Facebook Twitter Reddit Pinterest Tumblr WhatsApp Email Share Link
Top