Stephanus influenced by Complutensian, more than the Erasmus fifth edition

An Enquiry into the Authority of the Primitive Complutensian Edition of the New Testament, as principally founded on the most ancient Vatican Manuscript; together with some research after that Manuscript. In order to decide the dispute about 1 John v. 7. In a letter to the Reverend Mr. Archdeacon Bentley, etc. (1722)
by Richard Smalbroke
https://books.google.com/books?id=cX0UGOjwT18C&pg=PA52

But Erasmus in his fourth edition of it, namely, in 1527 g, professed his agreement with the Complutensian text of the New Testament, took many various readings out of the same, and in many places alter’d his former text, by taking into the room of it the readings of that excellent Spanish edition, that had by that time gained the highest reputation and authority. And h as for his fifth and last edition, he made very little alteration in it from that which immediately preceded it, that is, at the distance of eight years, and just before his death. So that he continued his great esteem for the Complutensian edition as long as he lived. 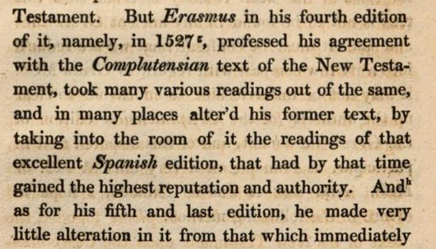 An Enquiry into the Authority of the Primitive Complutensian Edition of the New Testament, as principally founded on the most ancient Vatican Manuscript; together with some research after that Manuscript. In order to decide the dispute about 1 John v. 7. In a letter to the Reverend Mr. Archdeacon Bentley, etc. (1722)
by Richard Smalbroke
https://books.google.com/books?id=cX0UGOjwT18C&pg=PA53

And with regard to Robert Stephens's third and most celebrated edition in 1550, in folio, Dr. Mill computes that there are 598 readings in it taken out of the Complutensian edition. And he assures us, that R. Stephens had that value for it, and paid that regard to its authority, that in this his best edition he resumed several readings out of the Complutensian Testament, which he had before rejected; and this in opposition to all other editions then extant: of which we have many eminent instances in the Apocalypse".

As for other editors of lesser character, tho' 'tis clear from Dr. Mill's collection that most of them paid that deference to the Complutensian edition as to accommodate their editions of the New Testament to it, yet it would be superfluous to mention them in particular, after what has been asserted of those superiqur editors Erasmus and Robert Stephens, who have been chiefly copied after by the subsequent editors.
Click to expand...

Smalbroke is trying to apply this to the heavenly witnesses, which works poorly, thinking that the CP must have had an ancient Vatican ms..

However his basic sharing on the excellence of the Complutensian is very helpful, and it was used heavily by Erasmus in his 4th GNT, and then given high priority by Stephanus as well, even over Erasmus 5, if the above is accurate.
Last edited: Mar 1, 2021
You must log in or register to reply here.
Share:
Facebook Twitter Reddit Pinterest Tumblr WhatsApp Email Share Link
Top