Radbertus, rad-bar'tus, Paschasius:
CCEL
Albert Hauck (1845-1916)
https://www.ccel.org/s/schaff/encyc/encyc09/htm/iv.vii.xi.htm
Views on the Eucharist
.... Two of his contemporaries opposed the view of Radbert, namely, Rabanus Maurus and Ratramnus (qq.v.), both of whom were Augustinian. The former took offense at the transformation of the elements into the historical body of Christ, denying that the mystery identified the sacramental with the historical body. A great many followed along the lines marked out by Radbert, among whom, of the ninth century, were Florus Magister, subdeacon of Reims, Hincmar of Reims, Remigius (qq.v.), and Pseudo-AIcuin.

Writing in the earlier medieval era, the uses by Radbertus of the heavenly witnesses were totally overlooked in the verse debate!

In the 9th century, a controversy erupted at the abbey of Corbie when a monk named Paschasius Radbertus wrote treatise called De Corpore et
Sanguine Domini (On the Body and Blood of the Lord). In it, he elucidated an early version of what would later be known as the doctrine of
Transubstantiation. This sparked off a debate over Eucharistic theology, as his ideas were criticized by many theologians of his day, including John Scotus Erigena, Raban Maur, Gottschalk, and Ratramnus. Of these, Ratramnus is the most notable, He responded to Radbertus with a treatise of his own, also titled De Corpore et Sanguine Domini. Interestingly, he observes at the beginning of it that there was no consensus on Eucharistic theology in his day. He writes:
(continues)

A commentary on Matthew by Paschasius Radbertus, abbot of Corbie in the first half of the ninth century, combines patristic scholarship with a renewed focus on the biblical text.70

The Witness of God is Greater

Paschasius Radbertus (785–865 AD)
Saint Paschasius Radbertus (785–865 AD) was a Carolingian theologian and the abbot of Corbie, a monastery in Picardy founded in 657 or 660 by the queen regent Bathilde with a founding community of monks from Luxeuil Abbey. His most well-known and influential work is an exposition on the nature of the Eucharist written around 831, entitled De Corpore et Sanguine Domini. ... Ratramnus wrote a refutation of Paschasius' treatise on the Eucharist, De Corpore et Sanguine Domini, using the same title. (continues)

HITS:
● [Exposition in Matthew] But why does He yield the Spirit, whom He had provided others, but because
He is dead? Yet if this would be the only thing, and nothing more wonderful had appeared in Him, never
would the Apostle say: “Because there are three who give testimony on earth.” So that in Christ,
because He is God, is Spirit, blood and water. The Spirit surely, whom He yields, and blood and water
in His own dead body, hidden by Him in the sacrament against human nature, which flow out for our
redemption.

Comment:
[Translator] When commenting on Matthew 27:54 “Now when the centurion, and they that were with
him, watching Jesus, saw the earthquake, and those things that were done, they feared greatly, saying,
Truly this was the Son of God.” He makes the remark that the best mark of Jesus divinity was the
yielding of his spirit (Matt. 27:50), which also was the chief thing that made the centurion
exclaim these words. Comparing it to Mark 15:39 “And when the centurion, which stood over against
him, saw that He so cried out, and gave up the ghost, he said, Truly this man was the Son of God.” This
is the context for Paschasius' commentary. (Jeroen Beekhuizen, correspondence, April 2020)

● [Exposition of Psalm 44] So he said that the King God the Father, from whom are all things, wanting
to make a wedding for his King Son, through whom are all things, would declare his nuptial love in the
same way, and also the Holy Spirit, who maintains all things. But unlike the inheritance so excellent and
so large which he shows in this love, he does not name the bride, except through this sacrament of
faith, that she believes perfectly in God the Trinity of the unity, and the unity of the Trinity. Which are
one in majesty and one in dominion and one in will. For which reason in this nuptial love, as
witnesses like in a document of dowry, Three are subscribing, Father and Son and Holy Spirit.
As also John the Apostle says that there are three on earth giving their testimony to this
mystical gift, Spirit, water and blood, and as is also found in the corrected codices: And there
are Three who give testimony in heaven (it is evident) Father and Son and Holy Spirit, and these
Three are One.

Comment:
[Translator] When commenting on Psalm 45:1 (Vulgate 44:2) “My heart brings up a good word; I
speak my things of a King. My tongue is the pen of a ready writer.” He explains the meaning of the
Psalmist that a good word refers to Christ, the Father’s Word, and proves this with scripture.
Then he explains that the Psalmist refers to the Holy Spirit as his tongue, pointing to his staying on the
Apostles as a fiery tongue on Pentecost. This is the context for Paschasius' commentary.
(Jeroen Beekhuizen, correspondence, April 2020)

[Translator] I've translated 'emendatioribus codicibus' as 'corrected codices'. It could also be
translated 'amended codices'. It's not entirely clear if he thinks the longer version is better or
the shorter. But it is clear that he is aware of differences in the codices. And also that on a
theological level he completely agrees with the content of the verse(s) [I John 5:7,8]. And I tend
to think that Paschasius prefers the longer version, which is why he adds 'videlicet' - 'how
clear!' to his quote.

(Grantley places his thoughts upon Radbertus! Oops. Jerome claimed to emend, correct, the text because there were those who omitted the verse, and Radbertus would be familiar with that history.)

... Paschasius Radbertus (c. 790-860), who noted that the comma was only to be found in those codices with a more correct text—in other words, those into which the comma had been inserted by later correctors.104
Click to expand...

SA: This is an example of the unscholarly, tacky writing of Grantley McDonald 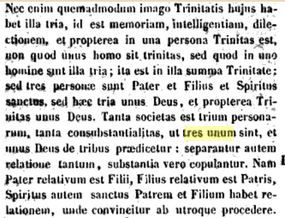