Meletius of Antioch - three fingers, "all three are one"

Meletius of Antioch (d. 0381)
http://en.wikipedia.org/wiki/Meletius_of_Antioch
Saint Meletius (Greek: Μελέτιος, Meletios) was a Christian bishop of Antioch from 360 until his death in 381.

The Arians took him from Haleb and set him up in Antioch. Going up (into the pulpit) to preach, Meletius showed them, during his sermon, his three fingers; and he said to them: "All three are one." Arians, seeing that he did not agree with them, deposed him, after he had governed (the Church) for two years, and established in his place Euzoius, who was an Arian from Egypt. 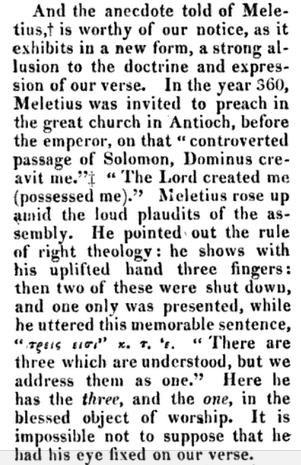 “Tliere are three which are understood, but we address them as one".

This is interesting, maybe a different later Meletius and involves strange ideas of Eusebius about authorship of the Johannine writings. The Greek needs translation.

Meletius is combined with the Eusebius verse suppression!
And we know he did not like three are one.

• [Butler] Meletius played an important part in the tangled affairs of the Church in the East during the long-drawn-out Arian controversies and power struggles. He was born in Melitene and came from a distinguished family of Lesser Armenia. Virtually nothing is recorded of his early life, but by the time he became a prominent churchman he was known for his conciliatory ways, and he managed to gain the trust of both orthodox Catholics, upholding the Creed of the Council of Nicaea (325 AD), and Arians. He was appointed bishop of Sebaste in Armenia, but here he ran into the first of many quarrels that were to cause him to lead an exceedingly unstable life as bishop. Forced to flee by an opposing faction, he retired first to the desert, from where he was transferred to the town of Beroea in Syria. The church historian Socrates claims that he was bishop there. The church of Antoich had been prey to Arianism, usually supported by the emperors, for many decades. Its bishop, Eustathius, a great theologian and staunch enemy of Arianism, had been forced into exile in Thrace in 331 by a party led by Eusebius of Nicomedia, which brought influence to bear on Constantine. He was succeeded by a run of bishops who upheld the Arian position. Then quarrels broke out among different factions within Arianism, and these were responsible for the banishment of the last of the pro-Arian bishops of Antich, Eudoxius. Some Catholics and some Arians agreed on Meletius as their choice to be his successor. This was in 361, which was also the last year of the reign of Constantius II, Constantine's son and a firm upholder of Arianism, as emperor in the East. Other Catholics opposed his appointment, believing him to be too much beholden to the Arians who had helped to elect him, who in turn hoped he would favour them. Meletius undeceived them when Constantius visited Antioch. The emperor ordered him and several other prelates to expound the text from the Book of Proverbs:”The Lord created me at the beginning of his work”(8:22). The”me”referred to is ”wisdom,”but Meletius interpreted the text in an uncompromisingly anti-Arian way, making the words refer to the Incarnation. This angered the Arians, who persuaded Constantius to banish Meletius to Lesser Armenia and gave the see to Euzoius, thereby giving rise to what is known as the schism of Antioch.
(Butler, Butler's Lives of the Saints, 1995, p. 122)

HIT:
• [Sozomen] The Arians, under the Impression that the divine Meletius upheld their Sentiments, translated him from Sebaste to Antioch. On his Bold Confession of the Orthodox Doctrines, they [the Arians] were confounded, and after they had deposed him they placed Euzoïus in the See. Meletius formed his own Church: but those who held to Consubstantiality turned away from him because he had been ordained by Arians. At the period that Eudoxius obtained the government of the church of Constantinople, there were many aspirants to the see of Antioch; and as is frequently the case under such circumstances, contentions and seditions divided the clergy and the people of that church. Each party was anxious to commit the government of the church to a bishop of its own persuasion; for interminable disputes concerning doctrine were rampant among them, and they could not agree as to the mode of singing psalms; and, as has been before stated, psalms were sung by each individual, in conformity with his own peculiar creed. Such being the state of the church at Antioch, the partisans of Eudoxius thought it would be well to entrust the bishopric of that city to Meletius, then bishop of Sebaste, he being possessed of great and persuasive eloquence, of excellent life, and all, as they imagined, being of like opinions with themselves. They believed that his reputation would attract the inhabitants of Antioch and of the neighboring cities to conform to their heresy, particularly those called Eustathians, who had adhered invariably to the Nicene doctrines. But their expectations were utterly frustrated. It is said that on his first arrival in Antioch, an immense multitude, composed of Arians, and of those who were in communion with Paulinus, flocked around him. Some wished to see the man because his fame was great, even before his coming; others were anxious to hear what he had to say, and to ascertain the nature of his opinions; for a report had been spread abroad which was afterwards proved to be true, that he maintained the doctrines of those convened at Nicæa. In his first discourses he confined himself to instructing the people in what we call ethics; afterwards, however, he openly declared that the Son is of the same substance as the Father. It is said that at these words, the archdeacon of the church, who was then one of the clergy there, stretched out his hand, and covered the mouth of the preacher; but that he continued to explain his sentiments more clearly by means of his fingers than he could by language. He extended three fingers only towards the people, closed them, and then allowed only one finger to remain extended, and thus expressed by signs what he was prevented from uttering. As the archdeacon, in his embarrassment, seized the hand, he released the mouth; the tongue was free, and Meletius declared his opinion still more clearly and with a loud voice, and exhorted his auditors to adhere to the tenets of the council of Nicæa, and he testified to his hearers that those who held other views deviated from the truth. As he persisted in the enunciation of the same sentiments, either by word of mouth or by means of signs, when the archdeacon closed his mouth, a contention between both sides occurred, not unlike that of the pancratium; the followers of Eustathius shouted aloud and rejoiced and leaped, while the Arians were cast down. Eudoxius and his partisans were transported with indignation at this discourse, and contrived by their machinations to expel Meletius from Antioch.