Punctuation at the beginning of Matthew is shown to be from the original scribe A. 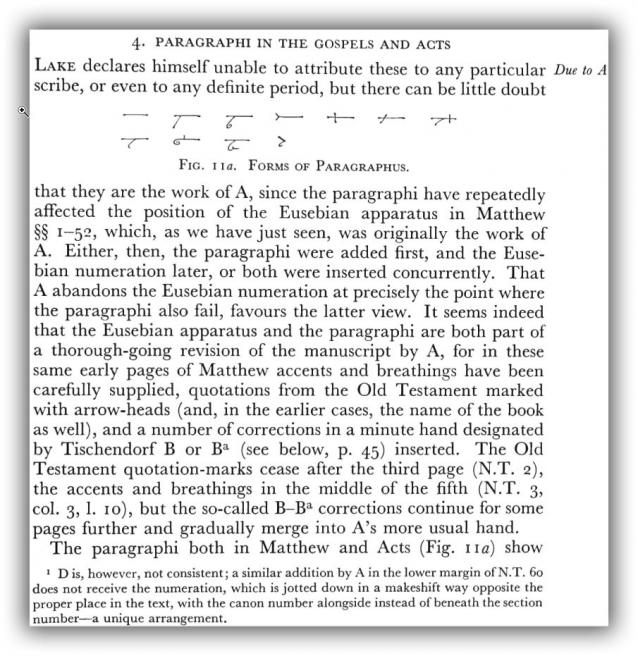 The corrections denoted B by Tischendorf and Lake all occur in the first few pages of Matthew. As Tischendorf had himself seen, they form part of an ambitious scheme of correction, annotation, and general improvement of the text, which we have already attributed to scribe A himself (p. 37 above). We have there shown how A soon tired of his task, and within the space of a page or two successively discarded the marking of Old Testament quotations, accents and breathings, paragraphi, and the Eusebian apparatus. The true ‘B’ corrections cease somewhere about the same point, but in a modified form the same script recurs sporadically, and gradually merges into A’s more usual type of correcting hand (Lake’s A3). p. 45
Click to expand...

Keep in mind that nobody has actually contested this analysis of Skeat, so all sorts of unusual elements exist in the supposed 4th century Matthew, in the early chapters, written by Scribe A.

"quotations from the Old Testament marked with arrow-heads (and, in the earlier cases, the name of the book as well)"

Seems to be simply ignored in Sinaiticus literature.

To be fair Jongkind did offer a bit of counterpoint to the Scribe A analysis, this is how it was reported by Charles Evan Hill:


... Dirk Jongkind, Scribal Habits of Codex Sinaiticus, Texts and Studies, third series, vol. 5 (Piscataway, NJ: Gorgias Press, 2007), 47, note 54, states that he is not convinced that these corrections (called the B corrections) are by scribe A or D. citing the fact ‘‘that the kai-ligature of the B corrections ... is different from both scribe A and scribe D. See e.g. folio 73.3 (NT 3), line 2.12, and 4.19 in the outer margin”. Tischendorf, he notes, thought that these "corrections” came from a slightly later hand not from the original scriptorium. - p. 9
Click to expand...

However, this does not really answer the Skeat analysis, which was a correction of Tischendorf. Plus, a "slightly later hand" does not change the anachronism problems.

As for this being a major argument, I doubt it. Not any more than my being two scribes if I write Simonides and Tischendorf in one place and Simonides & Tischendorf in another.
Last edited: Jun 16, 2021

Skeat is correcting the Tischendorf erroneous attempt to push those accents forward some centuries.

If you read the above carefully, you will see that Skeat is correcting the claim of Tischendorf that all these accents and Old Testament references and other punctuation is some later corrector B. Skeat says that it is all scribe A, and simply ignores the problem that Bible manuscripts of that age should not have these types of accents, as we note that the lack of accents in the original text was used as an argument for the 4th century date by Tischendorf and Scrivener.
Last edited: Jun 16, 2021

Scrivener had been told from Tischendorf that there were no breathings or accents from the original scribes, and used this as a sign of the theorized age of the manuscript.

— the various corrections the primitive text has undergone from ten or more different hands, with inks of many various shades, in different ages, yet nearly all before breathings and accents came into common use :
https://books.google.com/books?id=CNmOa7HaS6EC&pg=PR61&lpg=PR61

the characters being uncial or capitals, formed separately and unconnected with each other, without spaces between the words or breathings (except ... Gal. v. 21), or accents, or the iota ascript or postscript ; the marks of punctuation also being exceedingly few.
https://books.google.com/books?id=v-JUmBD5zIcC&pg=PP21
Click to expand...

And any accents are placed with late medieval correctors, Hermas on p. xxv is the supposed corrector D.

He places "corrector B" at the end of the sixth century, and has him handling Matthew:

corrector B ... This corrector has only touched the Gospels, and especially the early chapters of St. Matthew. Indeed, he has much deformed the first leaves of the N. T. by adding breathings, accents, stops, and apostrophi, till after a few pages he gradually got tired of his useless labour.
Click to expand...

The problem we have here is that Skeat & Milne showed that this actually has to be scribe A, who as one of the original scribes is theorized to the 4th century. However, then he should not be placing accents on words as part of a embellishment scheme.
Last edited: Jun 16, 2021

Now in modern times, the above tells us about accents and breathings in Matthew (in addition to the supposed medieval corrector in Hermas, which makes no sense in two widely diverse spots).

8. Throughout the New Testament of Sinaiticus the words are written continuously in the style that comes to be called “biblical uncial” or “biblical majuscule”. The parchment was prepared for writing lines, ruled with a sharp point. The letters are written on these lines, without accents or breathings. A variety of types of punctuation are used: high and middle points and colon, diaeresis on initial iota and upsilon, nomina sacra, paragraphos: initial letter into margin (extent of this varies considerably). We shall return to these features in relation to Mark’s Gospel shortly.
Click to expand...

Peter Malik mentions the accents and breathings, from Skeat, without considering the difficulty of their being by scribe A:

The Earliest Corrections in Codex Sinaiticus Further Evidence from the Apocalypse (2015)
Peter Malik
Faculty of Divinity, University of Cambridge
http://rosetta.reltech.org/TC/v20/TC-2015-Malik.pdf

57 Interestingly, Milne and Skeat, Scribes and Correctors, 36-37, postulate scribe A’s “grandiose but quickly abandoned scheme for the embellishment of the manuscript” (26), a scheme which he gave up early on in Matthew, as evidenced from the cessation of Eusebian enumeration, paragraph, markings of OT quotations, and accents and breathings. It would be interesting to see if there are any other, perhaps more subtle, traces of gradual deterioration of editorial performance. See Hernandez, Scribal Habits, 95, who contemplates a possibility that the “MS was sent out without being proofread.” As noted above, there is sufficient evidence from other portions of Sinaiticus that some “proofreading” did in fact take place, but he is correct (as it seems) in observing that, in Revelation, such evidence is lacking. p. 11
Click to expand...

Why do we write accents on our ancient Greek?
Posted on June 6, 2009 by Roger Pearse
https://www.roger-pearse.com/weblog/2009/06/06/why-do-we-write-accents-on-our-ancient-greek/


The early uncial manuscripts of the New Testament had no accents at all. The accentual system now in use dates only from the ninth century A.D.
Click to expand...

Sinaiticus is written in a simple and dignified ‘Biblical uncial’ hand, the letters being free from ornamental serifs. There are no accents and breathing marks.
Click to expand...

Transcriptions of early Greek manuscripts do not include accent marks (as in modem printed Greek editions) simply because the early manuscripts rarely had accent marks (only an occasional rough breathing mark).
Click to expand...

And on p. 80-81, he places the accents marks as from correctors from the 9th to 11th century. Again, the fact that scribe A was supposed to have put in accents in the 4th century is totally missed.
Last edited: Jun 16, 2021

Even Dirk Jongkind in Scribal Habits of Codex Sinaiticus (2013 Gorgias Press edition) does not help. First he is going back to the Tischendorf-->Scrivener error.

Scrivener, relying on Tischendorf, describes .... Corrector B is a full age below corrector A (end of the sixth century) and this corrector is followed by Ba, who only worked on the early pages of Matthew. p. 10

B He made frequent corrections on the first pages of Matthew and specifically on orthography and is therefore very interesting. p. 12
Click to expand...

Then Jongkind goes to the Skeat correction:


The B corrections mainly occur on the first pages of Matthew and are to be seen as an abandoned project by scribe A to improve the quality of the codex.31
Click to expand...

Then Jongkind discusses this again, but again misses the accent anachronism problem.

There is a caveat here, and that is that the group of corrections by corrector B that occur mainly in the first part of[ Matthew] should not be considered along these lines. Tischendorf thought that all these corrections came from a hand slighdy later than the scriptorium hands, while Milne and Skeat attributed them all to scribe A as part of “an ambitious scheme of correction, annotation, and general improvement of the text.”53 If Milne and Skeat’s explanation is accepted, it carries with it the suggestion that the B corrections are part of a possible third correction phase.54 The first phase is formed by the corrections made by the scribe of the main text whilst copying, and the second phase the subsequent correction by scribe A and scribe D of the text of Matthew. For the sake of the argument, we will leave out the B corrections, which do occur close to a correction by scribe D on the verso of folio 73.2. - p. 47
Click to expand...

We could add two further arguments in favour of a fourth scribe. Firstly, the so-called B corrections occur predominantly in the Gospel of Matthew and could therefore be allocated to this fourth scribe. Milne and Skeat ascribe all these corrections to scribe A, but acknowledge that they form a distinct group of corrections. However, if we apply their criteria for distinguishing scribes to Matthew, we find a much stronger argument. ... A good case can be made for a fourth scribe who is responsible for the Gospel of Matthew only and whose bookhand is virtually identical with that of scribe A. This scribe would be only distinguishable from scribe A by means of an analysis of his orthography and by the coronis. However, none of the palaeographic authorities has so far ever proposed a different scribe for Matthew, and it may well be that an explanation for the differences between Matthew and other work by scribe A must be sought in some outside influence. p. 127-128

We have seen that the spelling of Matthew does not show scribe A’s normal spelling and something may be going on there that merits investigation, possibly even the identification of another scribal hand. p. 255
Click to expand...

A new scribe in Matthew would only harden the anachronism problem of wanting to accent the text. (There is also the surprise of adding the OT prophetic spots.)

Jongkind misses totally the question of the accents in Matthew in a supposed 4th-century text.
Last edited: Jun 16, 2021

Brent Nongbri
The Eusebian Apparatus in Codex Sinaiticus - May 25, 2021
https://brentnongbri.com/2021/05/25/the-eusebian-apparatus-in-codex-sinaiticus/