WIP - GOAL IS TO SEPARATE THE VARIOUS EXPOSITIO FIDEI
Click to expand...

Research needed, seems be seen by Swainson, yet Caspari is given first credit?

Witness uses Cuthbert Hamilton Turner on Dom Germain Morin, which is quite different than the Caspari approach
https://books.google.com/books?id=gzdKAAAAMAAJ&pg=PA154
(10)

One of the early clear evidences against the heavenly witnesses in the Greek mss is from Cyril of Alexandria. No surprise here, because we are talking about a writer in Alexandria after 400 AD.

Therefore the faith profits them who will hold it unshaken; how it profits, the all-wise John will assure us saying, Who is he that overcometh the world but he that believeth that Jesus is the Son of God? This is He that came through water and blood, Jesus Christ, not in water only, but in water and blood, and the Spirit is Truth; for three testify, the Spirit, the water and the Blood, and the Three are One.

Homily-style writings that omit the verse are rare. The BVDB censored forum (my fan club

) was having a problem finding this reference. ....

While we are with Cyril, I think I will mention a puzzle to be resolved. There is a work "Expositio Fidei ad Cyrillum" which has a strong allusion reference to the heavenly witnesses. This work is published with Jerome material and is ascribed to Marcus Celedensis.
.
Who is Cyril? Is it Cyril of Jerusalem? The timing is right. Cyril, though was a Greek writer.
.
In the early centuries many of the Latin writers were Greek-savvy, and thus their referencing the heavenly witnesses is a general evidence. This includes the Tertullian allusion and the Cyprian reference.
Click to expand...

The Muratorian Fragment and the Development of the Canon (1992)
Expositio fidei chatolice
Mark Hahneman Geoffrey
https://books.google.com/books?id=0HKOJt33wLYC&pg=PA19

This leaves in the Codex only the short work ‘De Abraam’ and the fragmentary detached leaf ‘Expositio Fidei Chatolice’ as unidentified. Otherwise ail the works date from the fourth to fifth centuries, save possibly for the Muratorian Fragment. The majority of the works are clearly late fourth-century. It is of course quite possible, if the Fragment dates from the late second-century, that an earlier work was included with the several later ones. However, if other arguments suggest a later date for the Fragment, then its inclusion in this Codex among such later works could only be considered as corroborative, at least for the Latin version.
Click to expand...

Grantley tries to suggest later dates, although he does humorously acknowledge the circularity of one such attempt by Karl Kunstle.

This has a connection to the Athanasian Creed.

The Nicene and Apostles' Creeds: Their Literary History; Together with an Account of the Growth and Reception of the Sermon on the Faith Commonly Called "The Creed of St. Athanasius." (1875)
Charles Anthony Swainson
https://books.google.com/books?id=6uRVAAAAYAAJ&pg=PA273
V.—There are two more professions in Quesnel’s Cod. Can. one, c. 37, which in Diss. xiv. § 5, he tells us is headed in one MS.
“Fides sancti Ambrosii episcopi,” and is as follows :

Google translate - with tweak
We Father, the Son, and the Holy Spirit, so perfect in the Trinity, that all the wealth and power unit. In fact, he says, who the Divinity of the separat of the Trinity are three Gods. Father, God the Son, and the Holy Spirit God, and the three are one in Christ Jesus, so three persons, but one power. Therefore a difference it makes more; unit of power excludes a number of quantity because the unit number does not exist. And so, there is one God, one Faith, one Baptism. If any one has no faith in the truth of this, non-Catholic Christian jiotest said, because it does not hold the Catholic faith; He is not an atheist, and the truth away.
Click to expand... 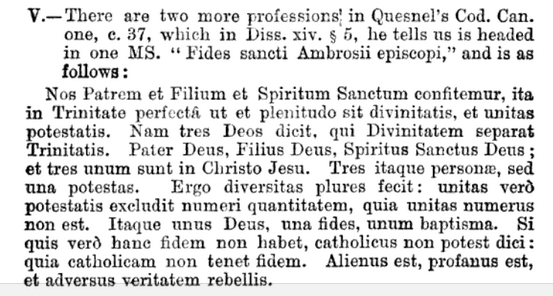 Exposition of the Orthodox Faith
John of Damascus
http://books.google.com/books?id=nf0qAAAAYAAJ&pg=RA1-PA16\
Click to expand...

Another complementary early reference is an exposition of faith published in 1883 by Carl Paul Caspari from the Ambrosian manuscript, which also contains the Muratorian (canon) fragment.

John Chapman looked closely at these materials and the section in Liber Apologeticus around the Priscillian faith statement "Pater Deus, Filius, Deus, et Spiritus sanctus Deus ; haec unum sunt in Christo Iesu". Chapman saw an indication that Priscillian found himself bound to defend the comma by citing from the "Unity of the Church" Cyprian section.[80]
77 The Codex Muratorianus, Journal of Theological Studies, 1907 pp.537–545
78 Alan England Brooke, A critical and exegetical commentary on the Johannine epistles, 1912, pp.158–159
79 Theodor Zahn, Introduction to the New Testament, Vol 3, 1909, p. 372
80 "It seems plain that the passage of St, Cyprian was lying open before the Priscillianist author of the Creed (Priscillian himself?) because he was accustomed to appeal to it in the same way. In Priscillian's day St. Cyprian had a unique position as the one great Western Doctor." John Chapman, Notes on the Early History of the Vulgate Gospels, 1908, p.264

Grantley - RGA - p. 37
The phrase unum sunt in Christo [lesu] subsequently occurs as a Trinitarian symbolum in two large-scale creeds. The first is the Reply to Pope Damasus, written in or before 384 (the year of Damasus’ death) by Priscillian or one of his followers.47 The second is the Expositio fidei chatolice, an orthodox creed written probably in Spain in the fifth or sixth century, in which this symbolum occurs as part of the wording of the Johannine comma.48

48 Expositio fidei chatolice, in Caspari, 1883, XIV, 305: “[...] pater est ingenitus, filius uero sine initio genitus a patre est, spiritus autem sanctus processet [procedit Caspari] a patre et accipit de filio sicut euangelista testatur, quia scriptum est: Tres sunt qui dicunt testimonium in caelo: pater, uerbum et spiritus, et hcec tria unum sunt in Christo lesu. Non tamen dixit: unus est in Christo lesu.” The Expositio is preserved in Milan, Biblioteca Ambrosiana ms I 101 sup., the same eighth-century manuscript that contains the Muratorian Canon. The date and provenance of the Expositio are disputed. Caspari, 1883, 304-308, the first editor of the document, suggested that it was written in Africa around the fifth or sixth century. Morin, 1899, 101-102, suggested less convincingly that it was written by Isaac Judaeus in the time of Pope Damasus (372). A more convincing explanation was offered by Kiinstle, 1905b, 89-99, who suggested that it was written in Spain in the fifth or sixth century against the position of Priscillian. In support of his contention that the Expositio is Spanish, Kiinstle noted that the same manuscript contains a Fides Athanasii, which is identical with the eighth chapter of the De Trinitate of ps.-Vigilius, and that the whole collection of documents in this manuscript is a suite of tracts belonging to the anti-Priscillianist movement. He concluded that Isaac cannot have written the Expositio, since he lived before the comma Johanneum is first attested, though this argument seems a little circular. Further on Morin’s hypotheses, see Lunn-Rockliffe, 2007, 33-62. It should be noted that the reading of the comma in Priscillian and in the Expositio is very similar to that later found in the biblical manuscripts Madrid, Complutense ms 31 and Le6n, Archivio catedralicio ms 6.
Click to expand...

The Muratorian Fragment and the Development of the Canon (1992)
Expositio fidei chatolice
Mark Hahneman Geoffrey
https://books.google.com/books?id=0HKOJt33wLYC&pg=PA19

HIT:
● [Exposition of our Universal Faith]
We believe in the one God according to the scripture, are to be believed, do not be like the Jews, or heretics, on its own, but in the mystery of the Trinity, that is, so that we would believe that the Father is not the Son, and certainly we do believe that the Son is not the Father, and certainly the Holy Spirit is neither the Father nor the Son, because the Father is ingenerate, the Son is certainly generated from the Father without beginning, and the Holy Spirit proceeds from the Father and receives from the Son. As the Evangelist testifies, that it is written, "there are three, that are witnessing in heaven, the Father, the Word, and the Spirit, and these three are one in Christ Jesus." He did not say, "One in Christ Jesus" ["one" masculine nominative singular] And in the Gospel it says, "Go ye, [...] baptizing the nations in the name of the Father, the Son, and the Holy Spirit." And again, that the Lord himself said, "I and the Father are one" And in the Psalms we read, "The Lord said to my Lord, Sit at my right hand." And in the Gospel of John this is said, "In the beginning was the Word and the Word was with God and the Word was God." Saying, therefore, that the Word is God, that is: the Son who is with the Father. By naming God twice he designated God the Father and Son as persons.