Erasmus used by anti-trinitarians per Theodore Letis (missing in Grantley)

Here are salient quotes I found. Generally Letis is saying that Erasmus, especially the Annotationes, provided fodder for the anti-Trinitarian movement.

Theodore Letis - similar views to Grantley on Reformation-era, and later, use of Erasmus by non-Trinitarians
https://www.purebibleforum.com/inde...Onsl2kl-zfekqaRBqEtbgHKTvI8Hjmks4VQ#post-4950

From Sacred Text to Religious Text: An Intellectual History of the Impact of Erasmian Lower Criticism on Dogma as a Contribution to the English Enlightenment and the Victorian Crisis of Faith
Theodore P. Letis
https://era.ed.ac.uk/handle/1842/6798
https://era.ed.ac.uk/bitstream/handle/1842/6798/511292.pdf
https://confessionalbibliology.com/wp-content/uploads/2015/08/From-Sacred-Text-to-Religious-Text.pdf

"This is particularly the case if these dogmata have been the source of religious strife and persecution-- the blight from which Erasmus, Grotius and all Antitrinitarians suffered." - p. 154

"In the sixteenth century and beyond, Erasmus was forever being claimed by the advocates of Antitrinitarianism as the founder of their movement." - p. 162

"Other historical accounts of the rise of Antitrinitarianism, written by later Unitarian historians, seem always to begin with Erasmus. Wallace in his Antitrinitarian Biography remarks:" - p. 164

Quoting Wallace
"Erasmus has given occasion, both to friends and foes, to consider him an Antitrinitarian.... That he is rightly classed by the Ministers of Poland and Transylvania, among those of the early reformers, who were instrumental 'in inculcating a knowledge of the true God and Christ, ' appears from ... remarks which occur in the Preface Dedicatory to his edition of Hilary. [They] certainly had their effect in smoothing the way way for Antitrinitarianism ..." (Wallace Vol. 3: 539). 57 - p. 165

57 Antitrinitarian appropriation of Erasmus has been the occasion of some offense to those who view Erasmus as perfectly orthodox. But such opinions of Erasmus can sometimes result in treatments that are a bit tendentious in the excercise of saving Erasmus from such associations e.g . Backus (1991). This issue will be briefly treated in the conclusion of the dissertation. - p. 165

What we have attempted to establish in this chapter is that some of Antitrinitarianism's more important roots can be traced to sixteenth-century Erasmianism and the lower criticism he practiced. - p. 181
Click to expand...

The Robert Wallace book is totally missing in Grantley, as well, despite this section being directly on the same theme. Granted, it is somewhat buried.

Here is the first page of the Erasmus Appendix.

Antitrinitarian Biography: Or, Sketches of the Lives and Writings of Distinguished Antitrinitarians; Exhibiting a View of the State of the Unitarian Doctrine and Worship in the Principal Nations of Europe, from the Reformation to the Close of the Seventeenth Century: to which is Prefixed a History of Unitarianism in England During the Same Period, Volume 3
https://books.google.com/books?id=dX0QAAAAIAAJ&pg=PA539
https://archive.org/details/antitrinitarianb03walluoft/page/538/mode/2up 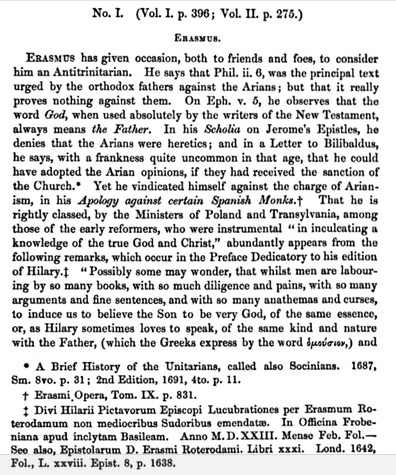 This section is not in relation to Grantley's sources, it is just interesting information that fits here, coming from the same Facebook thread.

This may give some leads as to how Erasmus was seen.

Evidently, Erasmus’ critics perceived difficulties here. In his Supputalio errorum in censuris Beddae Erasmus finds himself having to answer charges of Arianism and Sabellianism. {LB, IX, 632A-633C; 634B-F) Erasmus’ defense is limited to asserting that his statements were taken out of context. His characteristic attitude toward theological issues of this kind follows immediately in the text of this paper.

There also was a lot at the Valladolid inquiry in 1527.

Erasmus and the Problem of the Johannine Comma
Joseph M. Levine
https://www.jstor.org/stable/3653961?read-now=1&seq=17#page_scan_tab_contents

It is true that Erasmus had pointed out more than once that the Fathers had stretched the meaning of a Biblical text to give it a trinitarian meaning. His friend, Wolfgang Capito, had seen the danger already in 1516 and urged him to soft-pedal.70 What Erasmus himself believed about the Trinity is still a little obscure. He was certainly soft on the Arians, whom he preferred to think of (with Jerome) as schismatic rather than heretical. He saw them in their historical setting, and made some effort to treat them dispassionately, even sympathetically.71 Yet he had no wish to see Arianism revived; as always, he abhorred division, and his own emphasis on the moral and practical purposes of Scripture and religion left him indifferent to metaphysical disputes. “Had I had any authority at those [ancient] synods where the peace of the world was at issue, I would have argued that it were better to profess ignorance of what the words homoousion or homoiousion portend with regard to the divine Persons, rather than either to maintain or attack them at the cost of such great tumult.”72 (continues, see footnotes)


Erasmus and the Arians: Remarks on the "Consensus Ecclesiae"
James D. Tracy

12 LB IX, 353BC: in regard to the disputed text in 1 John 5 concerning the three heavenly witnesses—which Erasmus in 1516 had said was added to the text to refute the Arians—he contends, against Stunica. that the Arians would ‘with equal right’ (pari jure) insist on the reading favorable to their position; even if the genuineness of this passage be granted they would not be ‘so stupid’ as not to realize that it could still be interpreted in a manner congruent with their beliefs, as Augustine himself does in writing against the Arian Maximian: “ ‘The Three are one. that is, they testify to the same thing.’ ” As elsewhere (see below, notes 17, 18), he concludes: “Certe ego, quod negant Arriani, non video posse doceri, nisi ratiocinatione.”

In subsequent writings between 1521 and 1527 Erasmus defended his original statements on Arianism with equal firmness. When from Spain Jaime Lopez de Zuniga published a critique of his New Testament scholarship, in which he listed ten passages manifestly proclaiming the divinity of Christ, Erasmus took up the challenge, arguing that each of the ten passages could be taken in a sense different from what Zuniga thought.17 His conclusion was that the divinity of Christ could not be proven from the New Testament except by a ratiocinatio, that is, an interpretation or argument based on the text, but not identical with its indisputable literal meaning.18
Last edited: May 17, 2021
You must log in or register to reply here.
Share:
Facebook Twitter Reddit Pinterest Tumblr WhatsApp Email Share Link
Top