This is important for our list of ECW references.
Also the various pseudo-authenticity stands.

From the James Snapp blog: 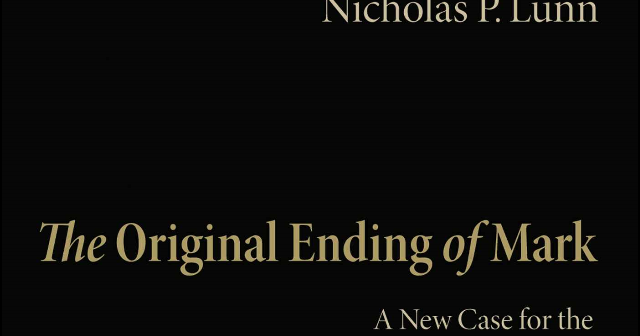 Yet another author supports the genuineness of Mark 16:9-20 -- and the defenders of the status quo are getting nervous . Recently a...

This was discussed more on the Facebook forum than the comments. My emphasis here will be the early church writers (and will watch for floating periocope discussions.)

James E Snapp
to Jr Casey Perkins,
CP: "Do you think that Lunn's claim of possible allusions in the Epistle of Clement, the Shepherd of Hermas, and Barnabas has any merit?"
I think the references in Clement of Rome are entirely plausible. Hermas, less so, and Barnabas, even less. But there is still more justification for any of the three than there is for the chronic "Clement and Origen show no knowledgee of these verses" rubbish that appears in commentary after commentary.
The thing is -- and this is why I didn't cite them in my book, despite having read Charles Taylor's old articles, mentioned by Lunn -- that since none of these early writers say that they are quoting from the Gospel of Mark, the comeback is practically inevitable: "Suppose Clement is utilizing Mark 16:9-20. How do you know that he is quoting it as part of the Gospel of Mark, and not as a freestanding text?" In other words, because we are dealing with allusions or indirect utilizations at the most, we face a special hurdle: instead of dismissing these witnesses because they are too late, they are vulnerable to dismissal due to being too early.
Click to expand...

Joseph Philips
Regarding the “freestanding objection” (“"Suppose Clement is utilizing Mark 16:9-20. How do you know that he is quoting it as part of the Gospel of Mark, and not as a freestanding text?"), isn’t this the fallacy of argumentum ad ignoratiam?
We know that 16:9-20 is present in about1,700 manuscripts of the Gospel According to Mark and was quoted explicitly as far back as Irenaeus, whereas there is not a shred of evidence that it ever existed as a freestanding text. Why, then, should the suggestion that it existed as a freestanding text be considered significant?
Shouldn’t those who resort to such a gambit be required to offer at least some evidence to that effect before their suggestion should even be considered? Or is any fantasy and logical fallacy acceptable when deployed against the authenticity of Mark 16:9-20?
Click to expand...

Steven Avery
These evidences singularly and collectively are very salient. In this post I will discuss some others that are corroborative to the traditional ending of Mark being very early == most assuredly, authentic.

(Having a conviction that Mark and Luke were published before 50 AD, the "freestanding" objections I consider significant but overdone, capable of lessening an evidence, but not suppressing. These 5+ less discussed early evidences are cumulative and corroborative, we should not lessen our scholarship simply because the hortians are skilled at hand-waving and conjectural objection.)

A plain introduction to the criticism of the New Testament for the use of Biblical students, 4th edition (1894)
Frederick Henry Ambrose Scrivener " Dr. C. Taylor, Master of St. John's College, Cambridge, in The Expositor for July 1893, quotes more evidence from Justin Martyr — hinting that some also remains behind — proving that that Father was familiar with these verses. Also he cites several passages from the Epistle of Barnabas in which traces of them occur, and from the Quartodeciman controversy, and from Clement of Rome. The value of the evidence which Dr. Taylor's acute vision has discovered consists chiefly in its cumulative force. From familiarity with the passage numerous traces of it arose; or as Dr. Taylor takes the case reversely, from the fact of the occurrence of numerous traces evident to a close observer, it is manifest that there pre-existed in the minds of the writers a familiarity with the language of the verses in question."

This is why the best scholarship will include all the allusions, unconcerned with objections like "freestanding". To include some but not others is to miss the point.

The Witness of Hermas to the Four Gospels (1892)
Charles Taylor

The Witness of Hermas to the Four Gospels

The Shepherd of Hermas is a mine of allusions to the Gospels and other writings that has not yet been fully understood. In form it is a lengthy revelation to one Hermas, written down by himself; but while some take his story for history, C. Taylor examines the significance of this text to our...
books.google.com

Which has translations from Greek and Syriac and Armenian and is a solid evidence. Taylor is working with the Greek, chapter 15. There is related text in the Syriac Chapter 2.

books.google.com
"The Armenian version seems (as Mr. Harris points out) to contain an allusion to St. Mark xiv. 20"

The Apology of Aristides on behalf of the Christians : from a Syriac ms. preserved on Mount Sinai Note that Harris was affirming a "signs following" reference in the Armenian, however Charles Taylor is going into the allusion from the Greek that did not need that extra pizazz.

James Anthony Kelhoffer (b. 1970) has a somewhat negative view on the Taylor view of the Aristides evidence, while being reasonably bullish on Taylor's discussion of Justin Martyr (p. 172-173.) which he does say that he "overstates the evidence" but that "a persuasive knowledge of Justin's knowledge can nonetheless be made".

Miracle and Mission: The Authentication of Missionaries and Their Message in the Longer Ending of Mark
James Kelhoffer

The Longer Ending of the Gospel of Mark (Mark 16:9-20) was appended to the Gospel of Mark in the first half of the second century. James A. Kelhoffer explores this passage's distinct witness to the use of gospel traditions and the development of Christian thought. Concerning the origin of this...
books.google.com

Kelhoffer discusses the Letter of Peter to Philip on p. 236-237 and can be helpful in discussing other early evidences like the Gospel of Peter.
Click to expand...