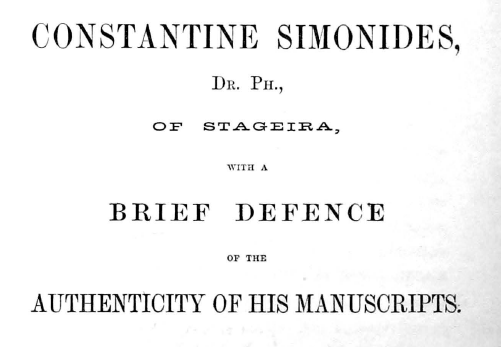 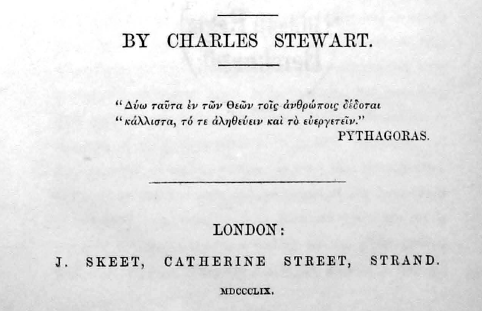 The sole object of the following pages is to vindicate the reputation of u friend, most unjustly assailed by calumny. Simonides Arrived in England in 1853, bringing with him letters of introduction from the most eminent men in the East. He at once became intimate with various members of the writer’s family, and the intimacy in time ripened into a sincere friendship. Simonides has on all occasions borne out the character assigned to him in his letters of introduction—that of being a gentleman of the most unblemished honour, and those who know him best need no other assurance than his own honourable conduct to convince them of the baseless nature of the charges that have been preferred against him. It is, however, not surprising that such charges should have been made. Simonides is but very slightly acquainted with modern languages, and his knowledge of modern customs is even still more limited. With the habits, manners, and languages of the inhabitants of the earth two, three, or four thousand years ago, he is perfectly familiar; but of the worldly wisdom of the present day, or of the ideas of modern society, his knowledge does not reach above a simplicity that is absolutely childlike. Moreover, in common with all Orientals, he possesses a natural secretiveness that is quite opposed to the frankness of an Englishman, and without any motive whatever keeps secret matters that most persons would never think of concealing. Thus although he has more than once had such epithets as “adventurer” applied to him, and labours under all the disadvantages that in this country accompany a man whose antecedents are unknown and whose life appeal’s to be a mystery, he has never once replied to his adversaries or .communicated the smallest particulars of his birth, family, education, or means. It is, therefore, not surprising that statements, made in an unusual manner, and documents produced under extraordinary circumstances, should have been doubted and their authenticity disputed by some portion of the public and the press. On the contrary, it is rather a cause for surprise that such large credence has been given to him by men whose pursuits have a tendency to promote an extreme caution in the reception of that which is new or novel. There is, however, no reason why Simonides should any longer be subjected to the inconveniences and prejudicies arising from his apparent position as an “adventurer.” The facts related in the present memoir have all come within the knowledge of the writer, and every incident can be corroborated by the most unimpeachable testimony. The publication of this memoir will, it is hoped, free Simonides from the insinuations that have been made against him, and by placing him before the public in his true position as a gentleman of good birth and family, as a man of the strictest integrity, who would scorn to commit a dishonourable action, and as one whose perfect indifference to all pecuniary considerations leaves no motive for the commission of the disgraceful deeds of which he has been suspected and accused, may assist in procuring for him that personal respect and esteem to which the writer, after a close and friendly intercourse, is convinced he is entitled. Should any doubt be entertained as to the veracity of the statements contained in the memoir, the writer will feel a pleasure in replying to any enquiry and in furnishing the authority on wliich the statement is made.