A Christian author who lived about the beginning of the third century. Little is known about his personal history. Eusebius mentions him several times and tells us (Church History VI.20) that he held a disputation with Proclus a Montanist leader at Rome in the time of Pope Zephyrinus (199-217), and calls him a learned man and an ecclesiastic. This latter designation need not imply that he was a priest. Several extracts from the dialogue against Proclus are given by Eusebius (Church History II.25, III.31 and VI.20). Caius is also mentioned by Jerome (de Vir. Ill., 59), Theodoret (Haer. Fab., II, iii), and Nicephorus Callistus (Hist. Eccl., IV, xii-xx), all of whom derived their information from Eusebius. Photius (Bibl. Cod., 48) gives some additional data drawn from a marginal note in a manuscript copy of the work on the "Nature of the Universe" in which Caius is said to have been a presbyter of the Roman Church and to have been elected "Bishop of the Gentiles". These indications, resting as they do on a confusion of the Anti-Montanist Caius with Hippolytus, are absolutely valueless. Additional light has been thrown on the character of Caius's dialogue against Proclus by Gwynne's publication of some fragments from the work of Hippolytus "Contra Caium" (Hermathena, VI, p. 397 sq.); from these it seems clear that Caius maintained that the Apocalypse of John was a work of the Gnostic Cerinthus.
Last edited: Oct 5, 2021

Caius (180-217 AD) Presbyter of Rome : Heretics Corrupt the Scriptures
[Introductory Notice to Caius, Presbyter of Rome (180–217 AD)] During the episcopate of Zephyrinus, Caius, one of his
presbyters, acquired much credit by his refutation of Proclus, a Montanist. He became known as an eloquent and erudite
doctor, and to him has often been ascribed the Philosophumena of Hippolytus, and also The Labyrinth. He wrote in
Greek, and finally seems to have been promoted to an episcopal See, possibly among the Easterns.4950 To him also has
been ascribed the celebrated”Muratorian Canon,”which is therefore given in this volume, with other fragments less
dubiously associated with his name. He has been supposed by some to have been a pupil of Irenæus, but of this there is
no conclusive evidence. (Caius, Presbyter of Rome; ANF, vol 5, p. 599)

Caius, Presbyter of Rome (also known as Gaius) was a Christian author who lived and wrote towards the beginning of
the 3rd century.[1] Only fragments of his works are known, which are given in the collection entitled The Ante-Nicene
Fathers. However, the Muratorian fragment, an early attempt to establish the canon of the New Testament, is often
attributed to Caius and is included in that collection.[2] For the existing fragments from Caius'“Dialogue or Disputation
Against Proclus,”we are indebted to Eusebius, who included them in his Ecclesiastical History.[1] In one of these
fragments, Caius tells Proclus,”And I can show the trophies of the apostles. For if you choose to go to the Vatican or to
the Ostian Road, you will find the trophies of those who founded this church.”[3] This is described by the Catholic
Encyclopedia as”a very valuable evidence of the death of Sts. Peter and Paul at Rome, and the public veneration of their
remains at Rome about the year 200."[1] There is also another series of fragments Eusebius gives from a work
called”Against the Heresy of Artemon,”although the Ante-Nicene Fathers note says regarding the authorship only that it
is”an anonymous work ascribed by some to Caius."[4] Caius was also one of the authors to whom the”Discourse to the
Greeks concerning Hades”was ascribed at one time.[5] (It was also attributed, much more famously, to Josephus and still
appears in editions of the William Whiston translation of his collected works, but is now known to be excerpted from a
work by Hippolytus of Rome.)[6] (Caius (presbyter). Wikipedia. <en.wikipedia.org/wiki/Caius_(presbyter)>)
Chapter XXVIII.—Those who first advanced the Heresy of Artemon; their Manner of Life, and how they dared to
corrupt the Sacred Scriptures.

● In a laborious work by one of these writers against the heresy of Artemon, which Paul of Samosata attempted to
revive again in our day, there is an account appropriate to the history which we are now examining. For he
criticises, as a late innovation, the above-mentioned heresy which teaches that the Saviour was a mere man,
because they were attempting to magnify it as ancient. Having given in his work many other arguments in
refutation of their blasphemous falsehood, he adds the following words:

o “For they say that all the early teachers and the apostles received and taught what they now declare, and
that the truth of the Gospel was preserved until the times of Victor, who was the thirteenth bishop of
Rome from Peter, but that from his successor, Zephyrinus, the truth had been corrupted. And what they
say might be plausible, if first of all [PAGE 247] the Divine Scriptures did not contradict them. And
there are writings of certain brethren older than the times of Victor, which they wrote in behalf of
the truth against the heathen, and against the heresies which existed in their day. I refer to Justin
and Miltiades and Tatian and Clement and many others, in all of whose works Christ is spoken of
as God. For who does not know the works of Irenæus and of Melito and of others which teach that Christ
is God and man? And how many psalms and hymns, written by the faithful brethren from the beginning,
celebrate Christ the Word of God, speaking of him as Divine. How then since the opinion held by the
Church has been preached for so many years, can its preaching have been delayed as they affirm, until
the times of Victor? And how is it that they are not ashamed to speak thus falsely of Victor, knowing well
that he cut off from communion Theodotus, the cobbler, the leader and father of this God-denying
apostasy, and the first to declare that Christ is mere man? For if Victor agreed with their opinions, as their
slander affirms, how came he to cast out Theodotus, the inventor of this heresy?”

● So much in regard to Victor. His bishopric lasted ten years, and Zephyrinus was appointed his successor about
the ninth year of the reign of Severus. The author of the above-mentioned book, concerning the founder of this
heresy, narrates another event which occurred in the time of Zephyrinus, using these words:

o “I will remind many of the brethren of a fact which took place in our time, which, had it happened in
Sodom, might, I think, have proved a warning to them. There was a certain confessor, Natalius, not long
ago, but in our own day. This man was deceived at one time by Asclepiodotus and another Theodotus, a
money-changer. Both of them were disciples of Theodotus, the cobbler, who, as I have said, was the first
person excommunicated by Victor, bishop at that time, on account of this sentiment, or rather
senselessness. Natalius was persuaded by them to allow himself to be chosen bishop of this heresy with
a salary, to be paid by them, of one hundred and fifty denarii a month. When he had thus connected
himself with them, he was warned oftentimes by the Lord through visions. For the compassionate God
and our Lord Jesus Christ was not willing that a witness of his own sufferings, being cast out of the
Church, should perish. But as he paid little regard to the visions, because he was [PAGE 248] ensnared
by the first position among them and by that shameful covetousness which destroys a great many, he
was scourged by holy angels, and punished severely through the entire night. Thereupon having risen in
the morning, he put on sackcloth and covered himself with ashes, and with great haste and tears he fell
down before Zephyrinus, the bishop, rolling at the feet not only of the clergy, but also of the laity; and he
moved with his tears the compassionate Church of the merciful Christ. And though he used much
supplication, and showed the welts of the stripes which he had received, yet scarcely was he taken back
into communion.”

● We will add from the same writer some other extracts concerning them, which run as follows:
o “They have treated the Divine Scriptures recklessly and without fear. They have set aside the rule
of ancient faith; and Christ they have not known. They do not endeavor to learn what the Divine
Scriptures declare, but strive laboriously after any form of syllogism which may be devised to
sustain their impiety. And if any one brings before them a passage of Divine Scripture, they see
whether a conjunctive or disjunctive form of syllogism can be made from it. And as being of the
earth and speaking of the earth, and as ignorant of him who cometh from above, they forsake the
holy writings of God to devote themselves to geometry. Euclid is laboriously measured by some
of them; and Aristotle and Theophrastus are admired; and Galen, perhaps, by some is even
worshiped. But that those who use the arts of unbelievers for their heretical opinions and
adulterate the simple faith of the Divine Scriptures by the craft of the godless, are far from the
faith, what need is there to say? Therefore they have laid their hands boldly upon the Divine
Scriptures, alleging that they have corrected them. That I am not speaking falsely of them in this
matter, whoever wishes may learn. For if any one will collect their respective copies, and compare
them one with another, he will find that they differ greatly. Those of Asclepiades, for example, do
not agree with those of Theodotus. And many of these can be obtained, because their disciples
have assiduously written the corrections, as they call them, that is the corruptions, of each of
them. Again, those of Hermophilus do not agree with these, and those of Apollonides are not
consistent with themselves. For you can compare those prepared by them at an earlier date with
those which they corrupted later, and you will find them widely different. But how daring this offense
is, it is not likely that they themselves are ignorant. For either they do not believe that the Divine
Scriptures were spoken by the Holy Spirit, and thus are unbelievers, or else they think themselves wiser
than the Holy Spirit, and in that case what else are they than demoniacs? For they cannot deny the
commission of the crime, since the copies have been written by their own hands. For they did not
receive such Scriptures from their instructors, nor can they produce any copies from which they
were transcribed. But some of them have not thought it worthwhile to corrupt them, but simply deny the
law and the prophets, and thus through their lawless and impious teaching under pretense of grace, have
sunk to the lowest depths of perdition.”

Church History of Eusebius: ALL 10 Books in One Volume

The Church History of Eusebius, the bishop of Caesarea, was a 4th-century pioneer work giving a chronological account of the development of Early Christianity from the 1st century to the 4th century. It was written in Koine Greek, and survives also in Latin, Syriac and Armenian manuscripts...
books.google.com 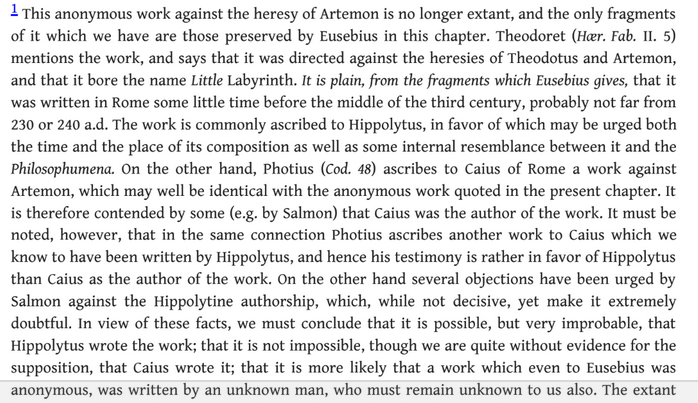 The work is commonly ascribed to Hippolytus, in favor of which may be urged both the time and the place of its composition as well as some internal resemblance between it and the Philosophumena. On the other hand, Photius (Cod. 48) ascribes to Caius of Rome a work against Artemon, which may well be identical with the anonymous work quoted in the present Chapter. It is therefore contended by some (e.g. by Salmon) that Caius was the author of the work.